Mountain Biking in the Desert 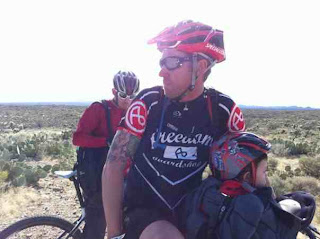 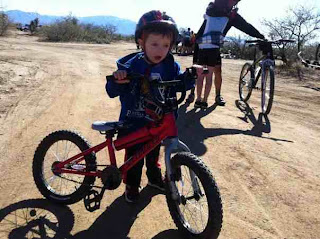 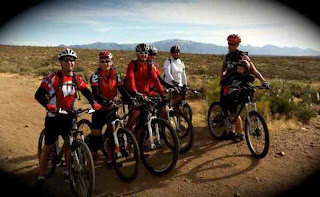 Mountain Biking with a great team and a "future Champ"! We had great weather for my first venture out onto the 24 hour trail getting ready for the upcoming Old Pueblo 24 hour race. With a 5 person team hopefully I won't have to make too many night laps! Ricks first time on a mountain bike and even on Norms bike with no clips he made it up all the climbs, some of which must have had 13 to 17 percent grades.
Posted by Pam at 9:05 AM No comments: 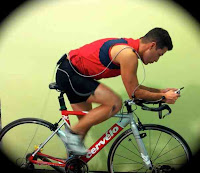 The "dreaded" metal man on the computrainer..Does anyone ever win with this guy? The challange is how much sweat you can leave on the floor!
Posted by Pam at 8:59 AM No comments: 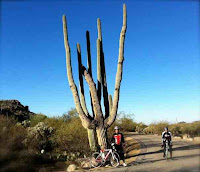 Lt Col Rick Crespo at the Innagural January Tri K 2 training camp. The weather was great, typical Tucson weather with the skys sunny and clear. Cool mornings with the days warming up nicely. Along with the typical bike, run and swims we even made time to get some mountain biking in, since we have a 5 person team competing in the upcoming Old Pueblo 24 hour mountain bike race. Lots of fun and some top training rides with brothers Ryan and Mike Mazura , Kerstin and Dr Matt Jones and others. Tuscon has been tagged as one of the top training locations in the nation, with miles of bike friendly roads, hills and scenic trail running.
Posted by Pam at 8:45 AM No comments: 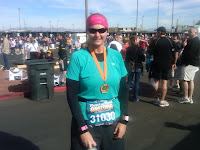 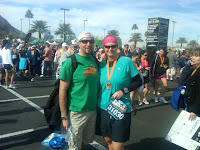 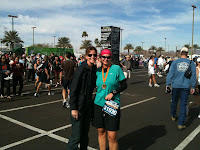 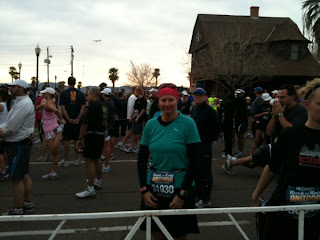 A BIG congratulations to Kerstin Jones on a great finishing time of 2:17:35 in Sundays Rock and Roll Marathon in Pheonix Az. Kerstin - you ROCK! You were so fast that you got past the 3 of us tht were on the look-out for you! With an average pace of 10:30 for your very first 1/2 marathon you are fast on the heals of husband Matt. Matt played race "Sherpa" and did an outstanding job of it, sending Kerstin off at the start and then racing over to the finish to park and see her cross the finish line. We still havent quite figured out how Kerstin managed to slip past Matt, Sherry and me since we were all on the look-out for her at different points in the race but she did!
Its a coach's dreamm to hear your athlete debrief after the race and say they did exactly what they had practiced in training! Kerstin has a mind like a steel trap and once she sets her sights on a goal there is no stopping her! Look for an exciting race year from this athlete!
Posted by Pam at 7:41 AM No comments: 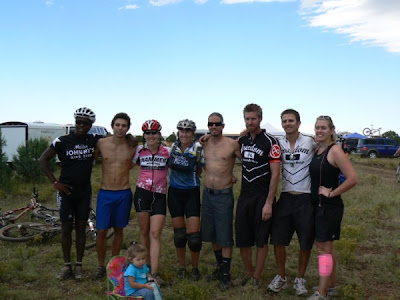 This is the second year that we have travelled up for the race & as usual, a GREAT time was had by all, so same time next year.
Posted by Pam at 4:55 PM No comments:

Racing In The Desert 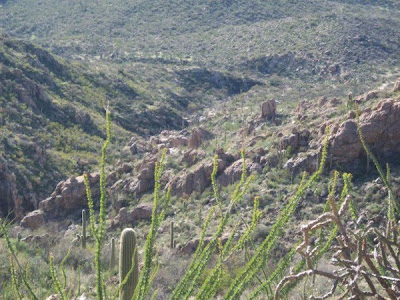 Did a local sprint tri today - the Sahuarita Lakes Tri. Distances, at least for the swim were a little strange - i.e. 1 KM swim, 500 M out and back. Bike & run "normal" sprint distances.

Labels: Racing In The Desert 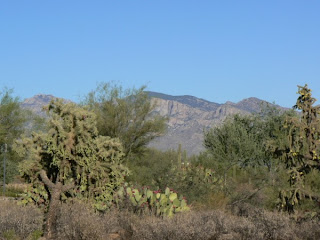 
So…it took us 2 and ½ days of driving with 2 cats and the dog to arrive in Tucson, and 2 days to unpack and move in. The movers unloaded and unpacked everything that I could find a place for on Wed. We spent the rest of Wed afternoon and Thursday putting away and emptying other boxes. I think everything is unpacked that is going to get unpacked.

My aunt , Helen and her daughter Judy and husband Phil and my daughter Kate all came down Friday afternoon from Phoenix and we went out to dinner last night at La Fuentes. Old Tucson – wonderful Mexican food and mariachi band. Our celebratory entry into Tucson and Judy and Phil’s 46th wedding anniversary. My aunt will be 90 in December and we will be here for her Birthday celebration!

Life is good…the guy from the gas company that hooked our gas up on Wed is a cyclist…saw my Cervelo t-shirt and bikes and figured out he would test a Fla girl out on a mountain ride Sat morning… I survived and got invited back again for tomorrow Sun am ride.

Ah…2.5 hours – of climbing. ( I am out of shape) A 7 mile climb, and a mountain pass. Mountain lions, wild pigs (javalina) coyotes , jack rabbits and snakes. Its like the wild west. This is a very cycling friendly town with lots of bike lanes and for the most part polite drivers….and the best part..after 2.5 hours – my clothes were still only slightly damp…WOW…no dripping sweat in the eyes…. Lots of runners and bikers out early in the morning. We started at 5:30 and were done by 8 am.

Now I know why we Fla people always get our butts kicked on the bike by the Western state folks. These are cyclists out here – even when people are modest and say they aren’t very good. I was huffing and puffing and Ryan was talking away not=2 0even breathing hard…hmmm I have some work to do before I try Mt Lemon…9200 ft…27 miles of climbing.

There are mountains everywhere you look – very humbling and the stars at night look to be close enough to touch. Our house is off of big sky road – Big Sky Ranch – and it is aptly named. At night the big dipper is huge and so bright you can actually see the stars twinkle.

Cooking steaks on the grill tonight for neighbors…Norm has a couple of good leads on jobs already and I start Monday at Tucson Eclectic.

Hope all is going well…